Novation brought back their small bass synth in a form of new version. It's an analog synth with digital controls and patch memory so for me it became more sensible choice than Korg MS-20 Mini without ability to store sounds. 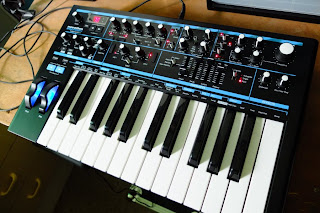 The first thing you notice that it's plastic. But I think it's good plastic. It's firm and snappy. It's not sturdy and probably not for those people who tend to break things easily. Knobs and buttons are smooth and both wheels are precise. Knobs turn sluggishly which makes it easier to control the values. Each value is shown in the single led display showing a numeric value of the knob that is being adjusted. 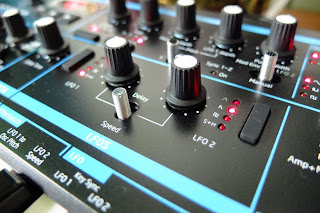 Switches are long metallic "screws". However I don't think it's wise to turn them just by touching the top, you need to take a grip with two fingers and even then be careful, because it feels like they could break. Maybe it's just a feeling. 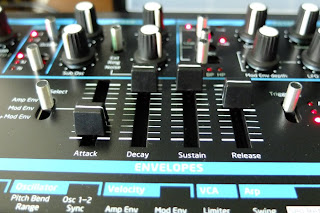 ADSR sliders are surprisingly firm, they don't wobble too much. Digital control allows these sliders to be used for either amp or mod envelope (or both at the same time). In conclusion the hardware is in my opinion good enough in this price range. Only issue is the power cord which is really short and also thin.

One notable feature is the speed when changing to another patch. It's instant. Maybe it's expected since it's analog, but the digital control could be also slow and there are bad examples of equipment with super slow patch changing.

How does it sound? Since I have no previous experience from analog synthesizers I can't really say much about it, but I can say it's way better than Roland Gaia (a virtual analog). There has been a lot of talk about analog vs. digital. In my experience analog wins hands down.

Issues? The paper manual seems to be written in haste and has some errors. It's not that bad since who reads it anyway and maybe Novation was in hurry, because they saw the possibility to hit the market with affordable analog gear.

With two oscillators, a sub oscillator and ext/ring/noise source (all can be on at the same time) it's possible to create quite interesting sounds. There are also two LFOs routed for different tasks. There is a lot of sense in the way sound generation is designed and I didn't really find anything that I thought was missing. If there is something it would be analog modulation effects like delay and reverb, but those would certainly increase the price and also the size of the unit, and I guess they are rather uncommon in instruments like this.
Posted by Krice at 03:52 No comments: