I had an idea to build a home studio. Cheap one of course. The main equipment is my new Zoom R16. It's an affordable mixer/recorder with 16 mono tracks and 8 XLR/TRS inputs (2 stereo inputs at the same time). I think it's the only piece of equipment in its price range with a nice set of features. 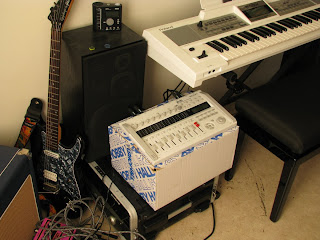 Then there is Roland E09 keyboard, it's also new equipment. I wanted to get instuments like drums directly from the keyboard without using a DAW. I want to play everything live without starting up PC and confusing myself with DAW. Output section is Alesis RA150 power amp and two Philips speakers from my old stereo set from 80's. Those speakers aren't actually reference monitors which they tell are needed to get truthful sound, but they have to do until I get reference monitors. Notice also that Andexinger piano chair. It's probably the most expensive piece of gear in proportion. And yes, even though not part of the studio setup it's Ibanez Airplane Flanger. Had to have that one.

I still have to get a split stereo Y-cable to connect Vox Tonelab for guitar and bass. I've already tried to record music, but I was disappointed about my drummer skills. It looks like I simply can't record drums first and keep the song together. It's not timing, but the structure of the song. Playing live is difficult, but I'm going to make it happen. I think it's perfectly possible to record guitar first with metronome and then drums. That way, because I'm mainly a guitar player, I can perform the song properly. Or that's what I hope anyway.
Posted by Krice at 02:03 2 comments: