Blog update and some thoughts

I have removed some old texts, mainly guitar build tweaks which where not interesting in my opinion. I'm not sure if anything else is either, but I've left reviews and studio developments which look really funny.

I have added e-mail notification for comments so when you comment it should send an e-mail. That way I can actually notice someone is commenting, because it's kind of hard to follow comments without that option.

This blog is really small and I was thinking to remove it entirely, but I guess it could be some kind of memory book for myself. Even so people do read this blog, the most hits for a single blog entry has been slightly over 2000. If it ever gets over 5000 I'm going to turn on AdSense! Well I don't know how much views you need to get actual money from ads, but that's the plan and I'm sticking to it.

I have bought more equipment than I have reviewed so there is always something to write about. I'm also planning to write retrospective articles about Propellerhead Balance and Mac Mini.
Posted by Krice at 03:42 No comments:

Looking for a new usb interface to replace Propellerhead Balance (and Alesis USB4 as preamp) I found Yamaha AG06. 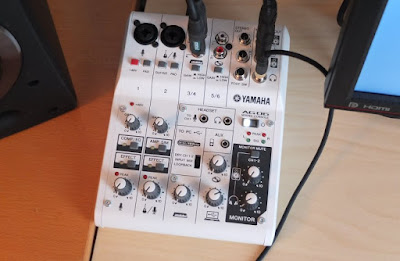 The unit has simple connections. Two mic/line inputs with preamp and dsp-effects, a line in stereo pair without preamp (as far as I can read the schematics), but with selectable gain pad that can be bypassed. Other ins are rca with turntable icon, a headset with 3,5mm connectors and aux. Those I don't use so I can't say much about them. There is also a footswitch in for whatever reason. Outputs are line out, main monitors out and main headphone out (6,5mm). The rear side of the unit has two usb connectors, one regular and one smaller for iPad. It's usb-power only, there is no external power supply.

The main headphone output is in kind of bad place (on top of the unit rather than front side) if you want to be critical about it, but I can live with it. It means you probably need a slightly longer cable for headphones and need to watch out that it doesn't get stuck on knobs etc.

The real surprise about this interface is that it has a dsp chip. It's used for the real time effects for preamp inputs (mics, guitar and optional line in). Both channels have compressor, high pass filter and eq section. Channel 2 has a selectable amp simulation which is actually quite nice, although it doesn't give you high gain sounds, only moderate gain. Channel 1 is dedicated to mics and it's the only channel that has the optional +48V power. Both channels share reverb/delay section which is also very nice with lots of options.

Having these dsp effects is such a great feature, because they allow you to shape the sound when you perform the music, rather than having to record without effects. The dsp editor is a free downloadable software that runs in the background with DAW. It's not a big deal to switch between them when you need to adjust something. The dsp software has also metering for input and output of the signal so you don't need to rely on the two leds on the unit itself.

I was skeptical about the preamp of AG06 and in fact I was thinking of getting a separate preamp, but after trying to record acoustic guitar I can't really find anything bad about the preamp quality. Acoustic guitar sounds like a guitar and it has only small amount of noise. The real test however was my electronic drum set which has notoriously small amount of output so it was really difficult to use it with my previous interface. I was thinking that I need to use lots of gain to bring the sound audible, but in fact there was no need for gain at all. Not only that, even level knobs don't need full power.

In summary this is a nice and cheap "all-in-one" interface for home studios without too much money to spend. The preamp is next generation in this price range and the usb sound resolution is 24bit/192khz.
Posted by Krice at 02:55 No comments: